This new exhibit includes animals that are uniquely different or have odd adaptations allowing guests to learn about some of the world’s most “Curious Creatures.”  Some of the unique species that guests are able to learn about in the new exhibit include:  Naked Mole Rats, Leaf Cutter Ants, Electric Eel, Red-Eyed Tree Frogs, Walking Batfish, Chain Dogfish, Flashlight Fish, Mata Mata Turtles and more.  In addition, the exhibit showcases some carnivorous plants such as Venus Flytrap, Pitcher Plant, Bladderwort and more.  In total, Curious Creatures includes over 20 exhibits and several interactive areas, some of which include:  a learning lab, where guests can see marine and terrestrial invertebrates; a mood wall that simulates the helpful adaptation some animals have to blend in and change color; and a strength tester where guests can compare their strength to that of the powerful mantis shrimp.

Guests are able to view the strange behaviors of animals like the Leaf Cutter Ants who’s jaws vibrate a thousand times per second to cut and breakdown leaves so they can carry them back to their nests where they grow fungus gardens which act as a food source for the ants.  Guests can also learn about curious adaptions of animals like the naked mole-rat, which has no fur, just pink, wrinkly skin.  These creatures live underground like moles and have small rat like tales, but are neither a mole nor a rat.

Curious Creatures allows visitors to engage in an exploration of biodiversity unlike anything the Akron Zoo has ever done before.  By connecting the guests with animals they perhaps did not even know existed, the Zoo hopes to encourage greater interest in the diversity of our natural world. 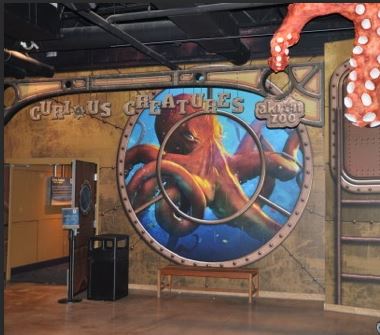