Jellies: Rhythm in the Blue, which opened summer of 2008, was the third exhibit that TC Architects designed for the Akron Zoo’s Komodo Kingdom exhibit also a TC Architects design. The exhibit featured 10 aquariums of jellyfish and was the only exhibit of its kind in the State of Ohio. Komodo Kingdom Education Center’s exhibit hall is designed to change every 4-5 years, keeping the exhibits unique and fresh.

Jellies: Rhythm in the Blue was one of the few aquatic exhibits at the zoo and was the first ever aquarium featured in The Akron Zoo’s history.

The exhibit featured an interactive section where visitors could enjoy under the sea fun with a touch tank that included crabs, starfish and sea urchins, a pipe organ, which allowed visitors to create the sounds of the sea, an underwater mural, which kids can climb on and learn about the different depths of the ocean, and an area where kids can dress up and dance like a jellyfish.

It was designed so that visitors could take a peek behind-the-scenes at the jellyfish lab to see the water systems and everything that goes into creating their exhibits.

The species of jellyfish included in the exhibit at the Akron Zoo were: 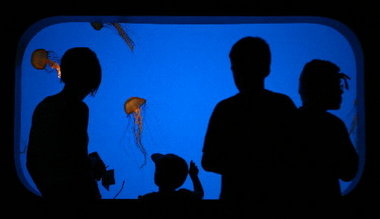